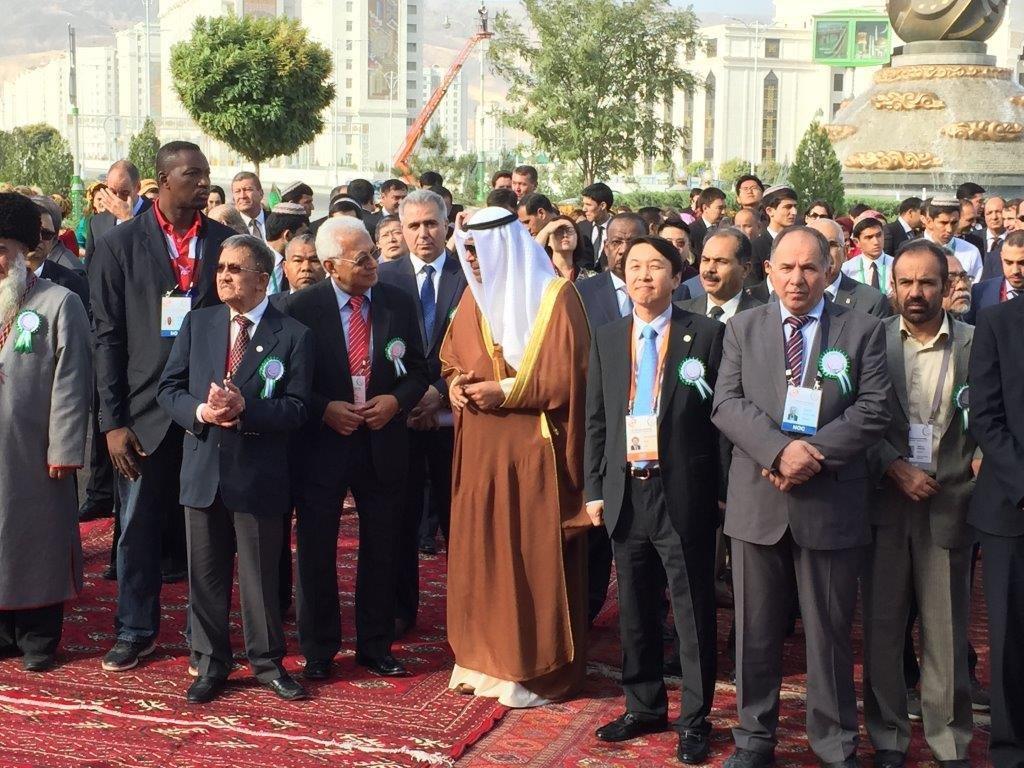 Mr. Nasser Nassiri, Vice President of WAKO (IF) and President of WAKO ASIAN Kickboxing Federation (WAKO ASIA) was invited by the President of OCA HE Sheikh Ahmad Al Fahad Al Sabah to participate in the 34th OCA General Assembly, which was held on 15th and 16th September 2015 in Ashgabat, Turkmenistan.

HE Sheikh Ahmad Al Fahad Al Sabah was re-elected President of the Olympic Council of Asia for the 2015-2019 at the 34th OCA General Assembly.

Turkmenistan is host country of the 5th Asian Indoor & Martial Arts Games AIMAG which will be held Ashgabat in September 2017.

The Games should be historical event. In fact, only the 45 NOCs from Asia are allowed to take part in the Asian Games promoted by OCA. However the OCA once again confirm its authorities in World Sport and by signing an agreement with Oceania National Olympic Committees (ONOC) gave the opportunity to the 17 Oceania National Olympic Committees to take part in 5th Asian Indoor & Martial Arts Games which will be held in September 2017.

In that occasion, Dr Robin Mitchell, the President Oceania National Olympic Committees (ONOC) together with his delegation members of Oceania national Olympic Committees were present and took part in the 67th OCA Executive Board and the 34th OCA General Assembly. The delegation had also meeting with Asian Federations leaders and exchanged the idea of the process of the participation of their delegation in the 5th Asian Indoor & Martial Arts Games.

Dr Mitchell said he had been joined in Ashgabat by 14 of the 17 full member NOCs and three associate members of ONOC, and that the delegation was excited to see the developments that have taken place since the signing of the Memorandum of Understanding with OCA in November.
He thanked the OCA for this initiative and described Asia as “an innovative and energetic continent” in the Olympic Movement.
Mr. Nassiri had the opportunity to meet with Dr Robin Mitchell and his delegation and discussed the possibility of participation of WAKO members in Oceania. At the same occasion, there were various exchanges between WAKO ASIA leader and the Presidents, Secretary General of delegation of ONOC. Mr. Nassiri is planning to visit Australia in early 2016 to meet with ONOC members.

Mr. Nassiri informed the delegation that WAKO ASIA has got strong experience in multi-sport organization events and has already demonstrated its power of organization of great Kickboxing events with great success during the previous Asian Indoor & Martial Arts Games such as Macau 2007, Thailand 2009, Vietnam 2009 and last during 2013 Incheon Asian Indoor & Martial Arts Games.

Mr. Nassiri also met China delegation from Hangzhou city. Hangzhou in South East China will host the 19th Asian Games in 2022 after their bid was approved by the 34th OCA General Assembly. A delegation led by Liu Peng, President of the Chinese Olympic Committee and China’s Sports Minister, waved flags and cheered after the house supported the bid with a round of applause.

At the same occasion Mr. Nassiri met with the Mayor Mr. Zhang Hongming and discussed about the process of Kickboxing competition during in 2020 Asian Games. Mr. Nassiri also met with Mr. JianHang JIN, the Vice President of Alibaba Group who was present to support the bid of Hangzhou city.

Mr. Nassiri comments: I am glad to be part of the OCA big family and witness of Asian Power.
WAKO ASIA will now give the opportunity to WAKO members in Oceania to take part in one of the most prestigious event recognized by IOC. This is which we call “ASIAN POWER” Nasser Nassiri added:

Asia is considerate as the power of Kickboxing in the World for the following simple reasons:

– Asia is the only continent of the World where the Kickboxing is recognized by IOC Continental Division (OCA).
– WAKO ASIA has also obtained the recognition from Olympic Council of Asia as body in charge of Kickboxing in Asia.