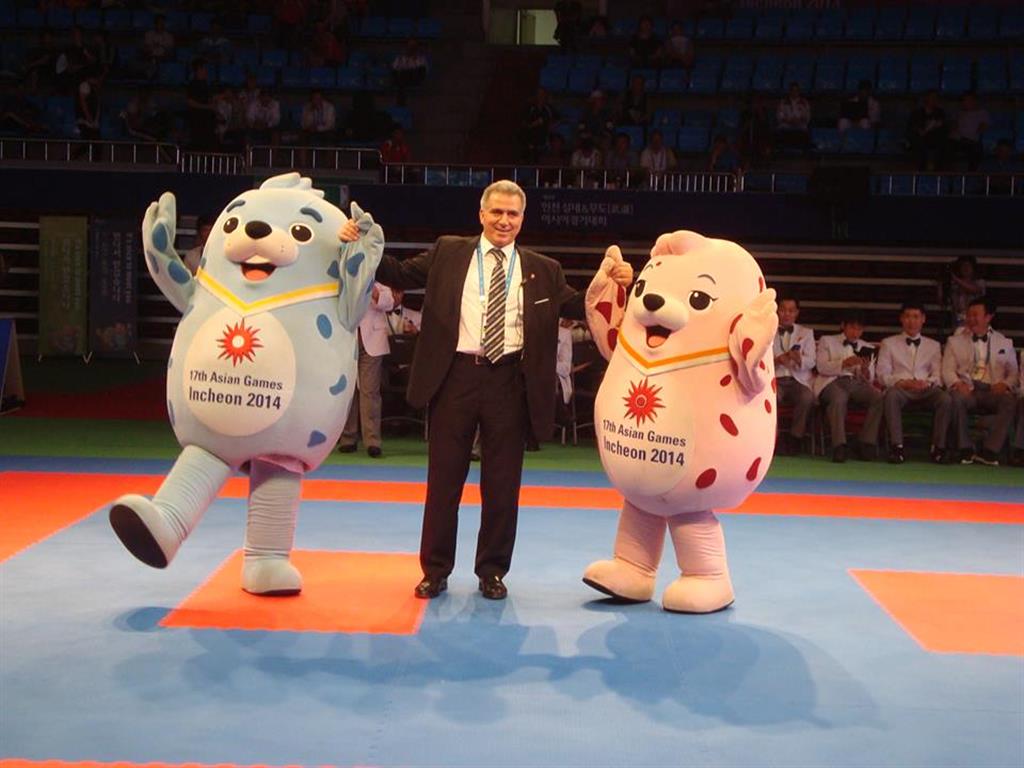 The Olympic Council of Asia, the IOC Asian Continental Division leaded by H.H. Sheik Al-Sabah which has 45 Asians Olympic Committees affiliated, has the mission of promoting sports in Asia.

The Kickboxing competition under the management of Nasser Nassiri, WAKO Vice President and President of WAKO Asia had amazing success.

Korea, have unveiled their official Games slogan – “Diversity Shines Here” (in Incheon). The slogan was finalized with the opinions and suggestions of people from a wide variety of specialized fields and backgrounds. It represents and highlights the significance of Asia’s wonderful diversity in history, culture and religion.
Asia will gather together in Incheon to display their power in unity, and finally realize Asia’s true development potential.

There is not a better way to describe today’s Incheon, the City that recently hosted the 4th Asian Indoor & Martial Arts Games (the previous times WAKO ASIA was the organizer at 2009 Vietnam Indoor Games, Bangkok 2009 Asian Martial Arts Games and 2007 Macau Asian Indoor Games). Incehon, literally ‘wise river’, formerly romanized as Inchon, is located in northwestern South Korea . The city was home to just 4,700 people in 1883. Today 2.76 million people live in the city, making it Korea’s third most populous city after Seoul and Busan . Incheon has since led the economic development of Korea by opening its port to the outside world, issuing in the modernization of Korea as a center of industrialization.

It was in Incheon that the OCA wanted to hold the 4 th Asian Indoor & Martial Arts Games which saw Incheon pulling out all the stops to make a good impression. These games represented by far one of the most important sports event ever held in the history of Korea. It consisted of organizing tournaments in 11 sports with 45 Olympic Committees involved 4,400 people (Athletes, Officials, Media, etc.) including 2400 athletes competing in different activities, excluding number of operators, security agents, opening & closing ceremony staffs

Kickboxing, which presented a competition only in Full contact, Low Kick and Point fighting in 9 different weight divisions between men and women, brought to Incheon 93 athletes representing 15 Asian Olympic Committees such as Korea, Jordan, India, Iraq, Kuwait, Mongolia, Syrian, Uzbekistan and Kyrgystan and etc… There certainly would have been more were it not for the economic crisis, which is rampant in that part of the world as well, forcing athletes from the Philippines, Malaysia, Sri Lanka and Nepal to stay at home.

it was pleasantly surprised by Vietnam which had made its debut in kickboxing in January 2009 when WAKO Vietnam was founded by Nasser Nassiri and their performance during last 4 years taking the first place in Kickboxing competition of 4th AIMAG incheon 2013.

It was almost incredible to see Korean athletes like PARK Hyeyoung testing them in point fighting and winning in the 52Kg class women!
Likewise, how nice it was to see the Vietnamese fighters at work in low-kick. In addition to showing remarkable fighting spirit and a good technical level, they managed two victory in final with a women, NGUYEN Thi Tuyet Mai in the 56Kg class Full contact against Kazakhstan athlete and GUYEN Thi Tuyet Dung in the 52 Kg class Low-Kick against Tajikistan athlete,

WAKO Vietnam athletes mad very favorable impression to all WAKO members with their technical ability and the heart they put into their fights. We could see that they were inspired by the victory, like giving everything they had to win a prestigious gold medal of 4th AIMAG for her country.

However, the most surprising thing was the interest that the kickboxing event and its organisation stirred up in many Asian Olympic Committee leaders, and the Incheon Asian Games Organizing Committee (IAGOC).

Nasser Nassiri, WAKO vice-president and President of WAKO Asian Kickboxing Federation together with his team in particular the leaders of WAKO in Korea (Suntaek Kong and Enucheon Jeong) did an excellent job of running the show during the 4 days of competition.

Nassiri brought one more time the competition to a conclusion without mishaps and with a well-balanced distribution of the available medals, showing that kickboxing in Asia is by now the patrimony of all WAKO Asia members.