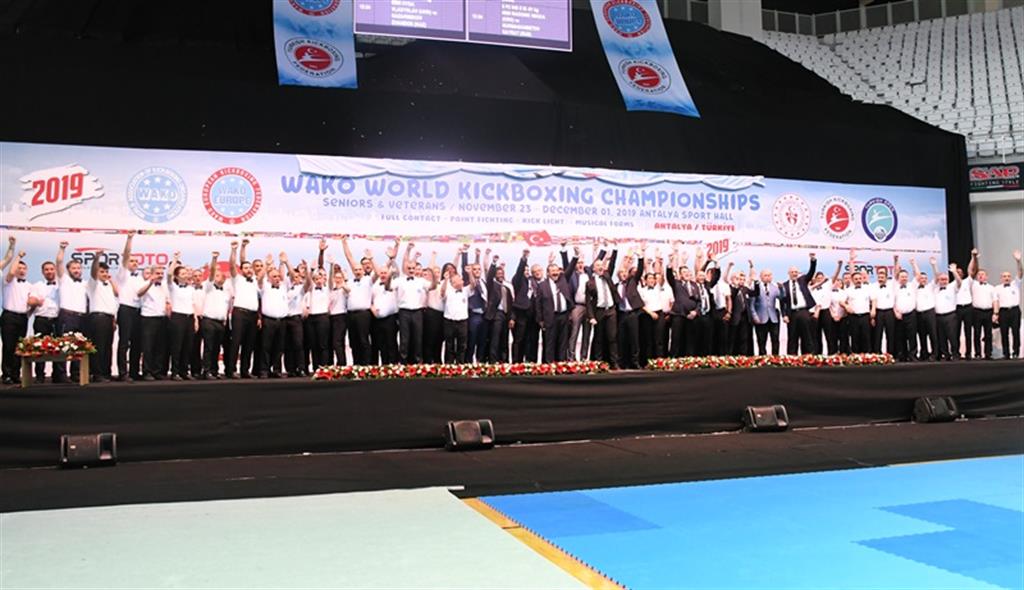 Second part of the World sports gathering was in Antalya, Turkey, where WAKO had championship in Point Fighting, Kick Light, Full Contact and Musical Forms.

Turkish Kickboxing Organization and its President Salim Kayici did a great job in hosting this prestiguous event.

With the participation of 65 countries and 760 entries as athletes, this was one of the biggest competitions in this rang. But not only competition was magnificent: there were plenty of activities on the margines of the championships: Athletes Corner, as the place where participants could get introduction of the IOC athletes careerer programs (runned by expert for international IOC programs, Mr. Milos Milenkovic from Serbian NOC), anti-doping info, WAKO for climate program (runned by WAKO Women in sport committee representatives), better sport performance instructions (runned by WAKO Coaches committee) and much more.

The Corner was runned by WAKO volunteers to who we say big „Thank you“ for the extraordinary professional work and efforts.

The day before championships has started, it was organized Athletes seminar with the massive number of the present audience, where WAKO VP Espen Lund gave a brief report about activities in the past period, which includes fantastic programs runned by WAKO national members as the part of the campaign „Because we care“, and which are different charity and inclusive programs.

The guest star at the Seminar and at the Championships was Ali Hussein Alkaldi, Syrian refugee who lives and works now in Jordan at Zaatari refugee camp and is actively engaged in WAKO sport programs in the camp. Ali was honored at the opening ceremony with the «WAKO Fair Play prize of the year» for his outstanding achievement in the Zaatary refugee camp.

During the Championships, WAKO marked International Kickboxing Day 30th November with occasional ceremony on the stage.

The most important fact was that at the Championships WAKO had Mrs. Irina Gladkikh and Mr. Andrew Hofer from the IOC Sports Department visiting the WAKO World Kickboxing Championship in Antalya, Turkey. This was the first time IOC was present at the WAKO World Championships and the objective was to get to know the sport, how the sport is presented and to see the level of some of the disciplines.
IOC representatives attended the WAKO Athletes seminar on November 29th, where Mrs. Irina Gladkikh addressed to the participants explaining which are the key values of the sport. Their report was wery much positive for WAKO and it gives us energy to move forward in the right direction.