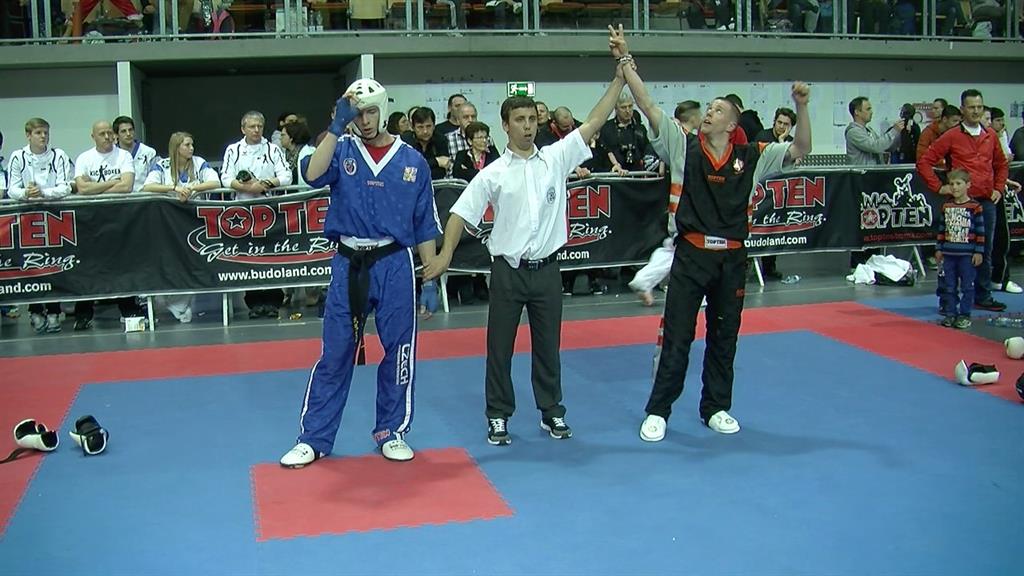 April 9th to 12th brought the Austrian Classics to the WAKO calendar kicking off on Friday evening with the team event, the full contact and the K-1 divisions. In total there were 1727 entries from 26 countries with 13 teams entered for the team event. Run under WAKO rules the competition ran all age and weight classes from younger cadets up to veterans.

As expected in the team event, the two favourites progressed to the finals, USA Allstars consisting of Raymond Daniels, Jack Felton, Robbie Lavoie and Chelsey Nash. They took on Kiraly from Hungary with Henrietta Nagy, Anna Kondar, Zsolt Moradi, Laszlo Gombos, Krizstian Jaroskiviecz and Ritchie Veres making up the team. However it wasn’t all plain sailing for either team. Kiraly came up against KBA from Italy and went into the last round of the fight trailing by 3 points. Ritchie Veres was sent in to face Andrea Ongaro, and used his speed and experience to gain the win and take the fight by a margin of 2. While the USA Allstars had to overcome the fact that 3 of their members were carrying injuries into the competition.

In the final the Hungarians took full advantage of the Allstars injuries and went into the final round leading by 10 points. Raymond Daniels stepped up to try and make back up the points, but his opponent Krisztian Jaroskievicz, not short of experience in holding a lead did not give Raymond any chance to recover such a deficit. The ending scoreline was 22-12.

Saturday morning was the grand champion divisions with 27 female fighters and 45 in the mens. In the end it came down to 4 Hungarian finalists, Anna Kondar, Mercedesz Veres, Laszlo Gombos and Ritchie Veres. Raymond Daniels made a drastic error in the semi final against Laszlo Gombos, assuming there was a second round, he didn’t feel the need to try to even the score with any haste while 1 point behind in the dying seconds of the fight. Laszlo went on to defeat his club mate Veres in the final and claim his 5th Austrian Grand Champion title. Anna Kondar faced Mercedesz Veres in the final and being about 10 inches taller than her had massive advantage. The 2 met in the grand champion final at the Bestfighter Tournament in Italy last year, and the result was the same this time with Kondar coming out on top.

On then to the individual divisions, with 10 tatamis running, 3 were devoted entirely to the senior blackbelts. The ladies ran continuously for the day on one, while the men’s ran over 2 areas. At only 17 years old, Shannon Ryan from Watford Martial Arts in the UK held nothing back as she kicked, punched and swept her way to 2 titles, -50kg and -55kg, beating Lucija Cicvara and Emilia Szabłowska respectively. The -60kg division saw 2 regular finalists and 2 of the worlds top fighters, Luisa Gullotti from Italy and Evelyn Neyens from Belgium with Gullotti taking the victory. Natasha Walker from Wolfpack Martial Arts and a Member of Top Ten UK became the first competitor to win a division in 3 different styles, point fighting, light contact continuous and kick light in -65kg. In the men’s divisions, Roman Brundl from Austria took 2 titles in -84kg and -89kg. The 3 biggest divisions of the tournament -69kg, -74kg and -79kg were won by Alex Veres from Hungary, Timmy Sarantoudis from Germany and Tilen Zajc from Slovenia.

On Sunday it was time for light contact continuous and kick light. With smaller numbers than the point fighting divisions, there was no shortage of quality. Familiar names took most of the divisions including Dorota Godzina, Natasha Walker, Paulina Jarzmik, Anna Znaor, Emanuil Dimitrov, Juso Prosic and Lukasz Wichowski, while a few new names were added to the list of Austrian Classics winners. For a full list of all the winners go to www.austrian-classics.at or to see action from the event go to www.brannmanndan.com .