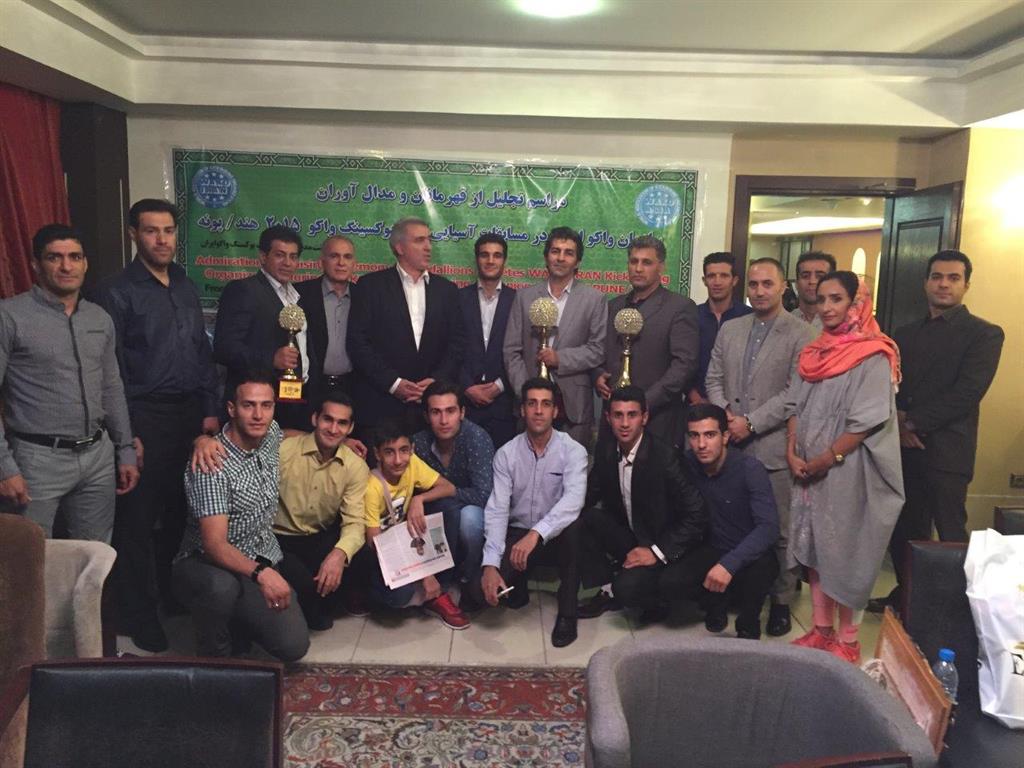 Dr Hasni at the same occasion remind the WAKO Iran athletes the important of compliance with Anti-Doping rules and regulations set by WADA and informed the members that together with his committee he is at disposal of the Delegates, Chiefs committee and athletes of WAKO Iran in different provinces.

WAKO Iran delegation participated in WAKO Asian Championships 2015 in Pune – India from 1 st to 9 th of August 2015 with delegation of 23 persons. The performance of WAKO Iran athletes confirm the hard work of Mr. Nasser Nassiri, President of WAKO IRAN during last 20 years. WAKO Iran delegation returned home with 30 medals (15 Golds, 10 Silvers and 5 Bronze). It is noted that some of the athletes participated in different styles in tatami and Rings sports.

The Delegates, Chiefs committee and medalist’s athletes received the prestigious gifts and mementos at the occasion of Admiration & Awarding Ceremony from Mr. Nasser Nassiri and WAKO Iran executive board members. The ceremony ended with an official dinner at one of the famous restaurant of the Capital “Tehran”.

For more pictures please look at the photo gallery !

WAKO IRAN KICKBOXING ORGANIZATION (WAKO IRAN), leaded by Mr. Nasser Nassiri, is WAKO (IF) and WAKO ASIA only official representative in Iran, founded in 1993 by initiative of Mr. Nasser Nassiri (the founder). WAKO IRAN is a not for profit organization, non-government organization and its main objectives is to promote WAKO Kickboxing Sport (Mats Sports & Ring Sports Styles) in Iran, at all levels, as a means to contribute to the positive development of society.

WAKO IRAN, obey all WAKO (IF) and WAKO ASIA Rules & Regulations and do not conducts any activates with Iranian Martial Arts Federation as well as the dissident kickboxing groups members of that Federation.