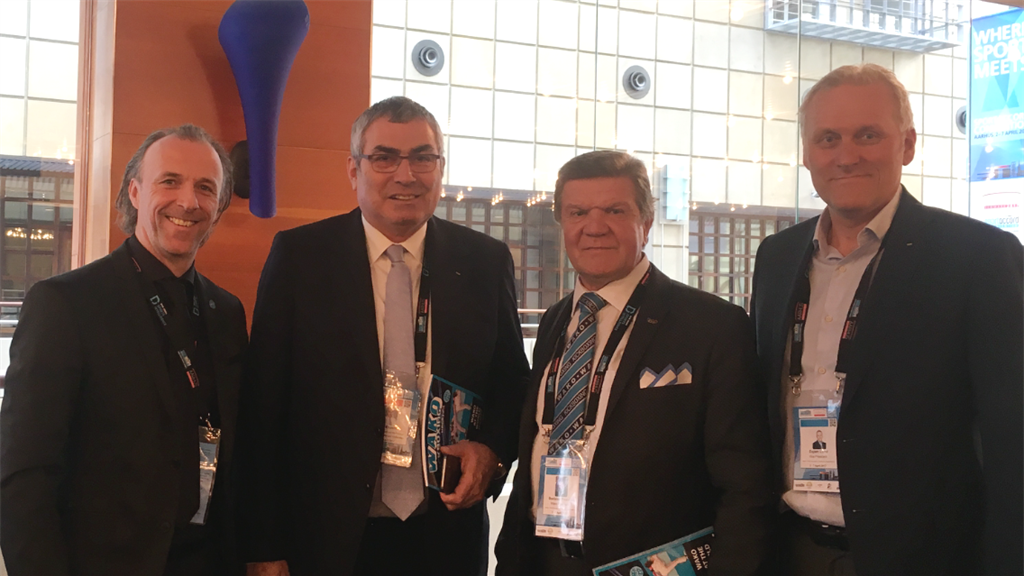 WAKO delegates on the SportAccord convention are busy these days as the daily schedule is full of important activities. Meetings, presentations, plenary conferences and contacts with media are going on from the early morning so WAKO President Dr. Borislav Pelevic, WAKO Vice presidents Mr. Roy Baker and Espen Lund takes all opportunities to introduce WAKO Application for the IOC recognition to the main sports authorities.
Among all high-level meetings, the most important was the one with the IOC Vice President Dr Ugur ERDENER (IOC History: Member of the Executive Board (2014-2016); IOC Vice-President (2016-); Member (2009-2014) then Chair (2014-2015) of the Medical Commission; Chair of the Medical and Scientific Commission (2015-); Member of the following Commissions: Women and Sport (2010-2014), Evaluation for the Games of XXXIII Olympiad in 2024 (2016-). The most important issue on the meeting was WAKO Application and process of the IOC recognition.
( Photo 1. above, With IOC Vice President Dr. Ugur Erdener)
Another very important outcome of the participation in the Convention was meeting with FISU representatives. WAKO President Borislav Pelevic had a pleasure to shake hands with FISU President Oleg Matytsin, as the confirmation of the positive outcome of WAKO Application for the membership in FISU. WAKO will become a FISU member during the next FISU General Assembly which will be held in August 2017 in Chinese Tai Pei.

A separate meeting with Mr. Patrick Baumann, SportAccord President was another good opportunity to establish good relations between WAKO and SportAccord and to analyze problems of the international sport today.

(Photo 4. With Mr. Si-Jong Lee from Korea, World Martial Arts Committee President and President of Korea Martial Arts Federation)
ARISF (Association of Recognized International Sport Federations) President Dr. Raffaele Chiulli, despite his informal character and very friendly approach to all delegates to the Convention, was very interested in a meeting with WAKO delegates to be informed about latest WAKO situation concerning member of nations, number of practitioners, WAKO structure, IOC application for the recognition, etc. He has spoken of the pride in seeing five of ARISF sports included in the Tokyo 2020 Summer Olympic Games program. He said: “There was a clear understanding that ARISF can play a key role in screening, monitoring and supporting all the IFs to help them achieve high standards in such areas as good governance, ethics and the fight against doping.”

SportAccord Convention held several very important conferences yesterday, such as Law Conference set to provide insights into the latest developments in sports law, regulations and integrity and Media Conference with the main topic: Athletes and Media- good relations. WADA had it’s conference also and there was stressed the need for better protection of whistleblowers who are leading the fight against doping.