God, Nature and Kickboxing gathered in one of the natural wonders of the planet: the waterfalls of Foz de Iguazú 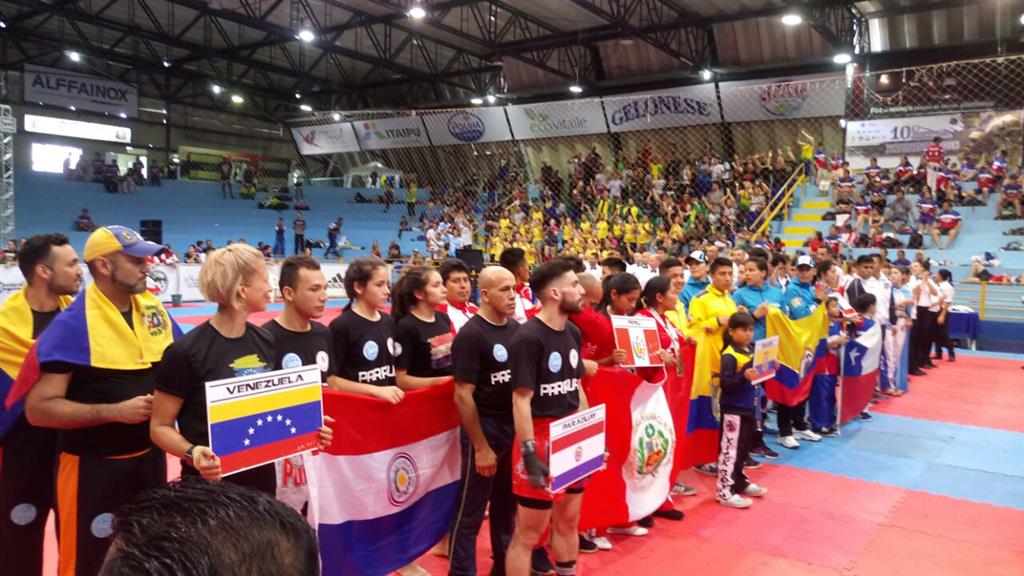 Kickboxing as a sport and martial discipline; as part of a natural process and internal competition of the human being towards others, improving every day, trying to overcome any hobstacle and personal difficult enemy, all this occurred in a magical and paradisiacal place, the most emblematic of the South American region where three countries and three borders converge: Argentina, Brazil and Paraguay. This scenario reminds us of the majestic creation and that the laws of nature applied to sport and bring success. This was the collective feeling of 9 Nations that, according to the Annual Calendar of the WAKO IF and of the WAKO PANAM in the responsibility of its President Paulo Zorello, met at the 10th South American Kickboxing Championship in Foz de Iguazú or known as the Iguazú Falls between November 30 and December 03, 2017.

WAKO PANAM in compliance with the demands of international organizations to provide sport management for our Olympic recognition and meet the standards of quality and organization, gathered the South American countries on November 30 for the celebration of nature and kickboxing in Foz de Iguazú. The very particular climate at this time season was not different from the ones that the other countries live between 40 and 45 degrees, the event took place at Costa Cavalcante gym.

Argentina, Bolivia, Colombia, Chile, Ecuador, Paraguay, Peru, Venezuela and Brazil partcipated with a total attendance of more than 650 athletes. Registration and weighing were held in the facilities of the Hotel Rafain de Iguazú. WAKO PANAM also carried out other activities such as promotion and sports outreach with arbitration seminars for the referees and judges of the 09 countries. There were a total of 40 referees and judges, among them Mr Jan Frana (Czech Republic) WAKO IF’s authority for ring sports, belts review activities were also held, and the annual meeting of senior management of WAKO PANAM was held with the presence of its President Paulo Zorello, its Vice Presidents Juan Corrales (Argentina); Hugo Lobo (Paraguay), Chipost (USA) and Fernando Granados (Mexico) this last one attending by videoconference, with the purpose of planning the year 2018 and the commitments that come in the immediate future.

The day continued for Friday, December 1st at the Costa Cavalcante gym in an area of ​​04 tatamis and 02 Rings, using the electronic system to run the competitions and through Sportdata management thanks to its representative Mr. Alexander Engelhardt (The Netherlands), started from the early morning with the competitions of musical forms, to then have the majestic opening ceremony; the Championship was inaugurated by President Paulo Zorello in the presence of the Officers of the WAKO PANAM, Presidents of other countries and representatives; athletes and referees took their respective oath in honor of the fulfillment of their duty to the sport. Later the Kickboxing party began in this encounter with nature in the modalities of Tatami and Ring developing successfully during the days of Saturday 02 and Sunday 03 with more than 500 fights with a result of zero accidents, thanks to the organization and the work of everyone present.

This way the WAKO PANAM concluded succesfully this Championship; thanks to the the quality of referees, the impeccable organization, the use of the technological standards such as the sportdata system and the high level of competence that show a strong and active region in sports management, everybody was united and part of the kickboxing, God and nature in the same scenario!