Invest and mobilize to end violence against women 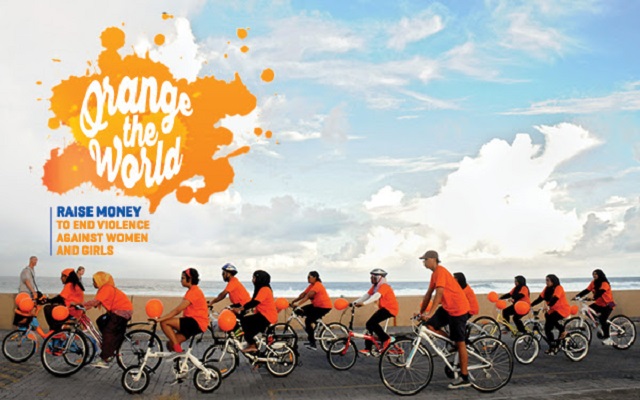 16 Days of Activism against gender-based violence , which runs from 25 November , the International Day for the Elimination of Violence against Women, until 10 December , Human Rights Day has the main task to galvanize global attention and action to end violence against women and girls , led by UN Women under the ‘Orange the World’ umbrella, starting this week, a host of public events will draw attention to the pandemic that impacts one in three women worldwide.
From marches in Uganda, Serbia and Timor-Leste, to a public rally on motorbikes in Pakistan, people will take to the streets to say no to violence .
During the 16 days of Activism, UN Women Executive Director Phumzile Mlambo-Ngcuka will visit Liberia, Malaysia, Papua New Guinea and India spotlighting the urgent need for robust funding and actions and showcasing innovative efforts to end the pandemic of violence against women and girls. Papua New Guinea’s National Football Stadium will be “oranged” at the final match of the FIFA U-20
Women’s World Cup.
Marking the 16 Days of Activism this year will include lighting major landmarks in orange —the colour chosen to symbolize a bright and optimistic future free from violence—from the New York City Mayor’s Gracie Mansion and City Hall to the European Commission Headquarters Building in Belgium; the Panama Canal Administration Building and the Presidential Palace in Ecuador ; Uganda’s Parliament building , as well as seven municipalities in Italy including Trieste, Pisa, Venice and Naples, and more than 30 buildings and landmarks in Istanbul .
What can we do?
– Donate. Resources to fund efforts to end violence against women are critically needed. To donate visit: donate.unwomen.org .
– Orange your profile picture on social networks to show your support and spread the word on all social media platforms using the hashtags #orangetheworld and #16days .