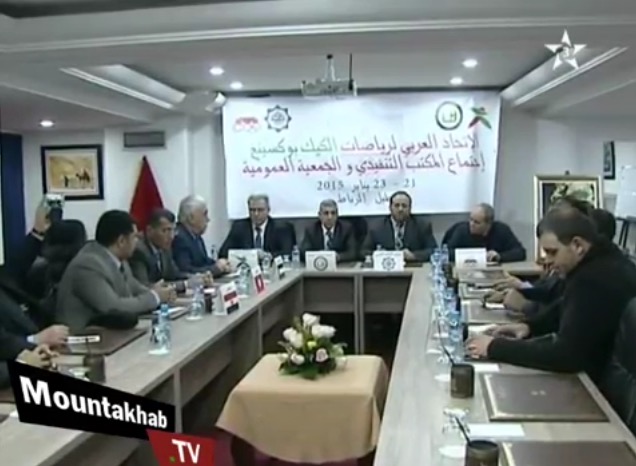 Arab Kickboxing Union confirm their full support to Mr. Nasser Nassiri current WAKO (IF) Vice President and President of WAKO ASIA candidature for WAKO Presidency during the next election of WAKO (IF) President.

Arab Kickboxing Union held a special congress from 21-23 January 2015 in Rabat (Morocco), during which various issues about development of Kickboxing sport in Arabian countries were discussed.

During the congress, the member unanimously confirmed their support to Mr. Nasser Nassiri’s candidature for next WAKO (IF) Presidency election.

Dr Basel Al Share, the president of Arab Kickboxing Union and Vice President of WAKO ASIA declared: “We all know about the administration power of Mr. Nassiri and his knowledge and back ground in Kickboxing and development of WAKO and this is the main reason why we decided to ask him to stand up as candidate and nominate him as WAKO President candidate. Mr. Nassiri was the closest person to our Leader Mr. Ennio Falsoni assisting him in WAKO (IF) administration during these years. He is a hard worker and specialist in Kickboxing with more than 30 years of experience.”

Dr Basel added: “Mr. Nassiri has been nominated by our organization to stand up for that position more than one and half year ago. We felt necessary to confirm our support to Mr. Nassiri because of recent propaganda, which of course has no merit.”

Mr. Abdul Karim El Hilali, the executive member of Arab Kickboxing Union and President of Morocco Royal Kickboxing Federation declared: “We all support the candidature of Mr. Nassiri as WAKO President not only because he is the longest exercising member of WAKO since 1982 but also because of his competence and experience.”

Mr. Qasim Al-Wasity, executive member of both Arab Kickboxing Union and WAKO ASIA declared:
“All WAKO members should take in consideration that the hard work of Mr. Nassiri during the past years ended to recognition of Kickboxing sport by Olympic Council of Asia (IOC’s Asian Continental Division) and inclusion of sport of Kickboxing in prestigious Asian Indoor & Martial Arts Games.”