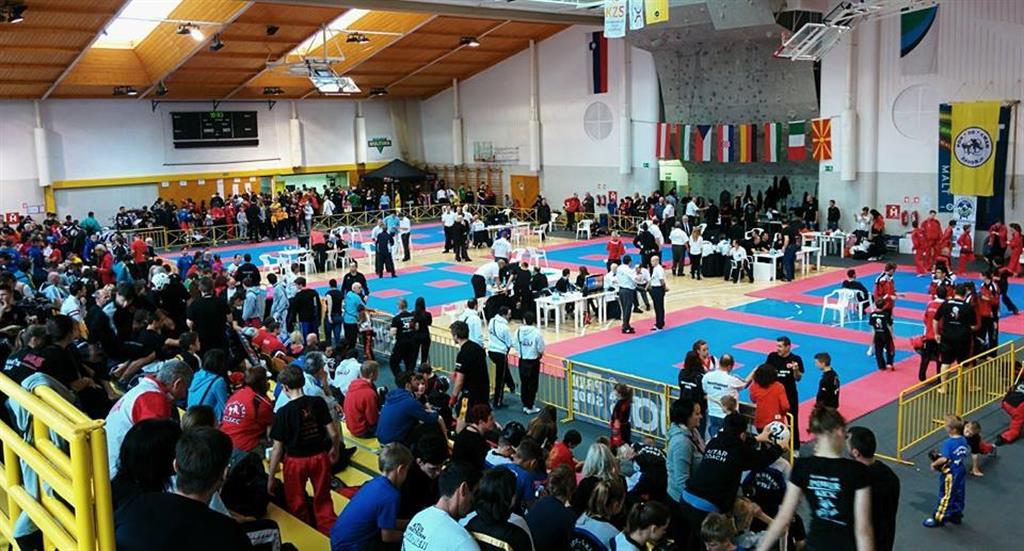 On Saturday 8th november, the club of martial arts PON DO KWAN ZAGORJE organized in the sports hall in Zagorje ob Savi traditional international kickboxing tournament called 31 SLOVENIA OPEN. On the sporting event, which is important for the club, the municipality of Zagorje ob Savi and Slovenia, 552 competitors competed coming from 66 clubs and 9 countries. Countries that were represented are Austria, Bulgaria, Czech Republic, Croatia, Italy, Hungary, Macedonia, Germany and Slovenia.

The keynote speaker at morning opening ceremony was the Mayor of Zagorje ob Savi, mr. Matjaz Švagan, of whom the club is very proud. In addition to the mayor a welcome speech was held by the President of Kickboxing Association of Slovenia, mr. Vladimir Sitar and the President of the Club of martial arts PON DO KWAN ZAGORJE, mr. Alen Vozelj.

This year, a big number of current World and European champions competed at the tournament, at least 40 medal winners from major international competitions. Like every year, this year we also had two very interesting racing discipline. The first is the “Masters” category or racing discipline.

This is the category in point fighting for 35 years old people. All contestants compete in one category without gravitational constraints. This category is not official, but only our domain. In this way, we want to give a chance to the so-called older fighters who still want to compete, but sometimes they are in a dilemma because of the younger, faster and more eager fighters. This year’s winner in this category was Michael Gerdenitsh from Austria. Michael also holds a large number of World Championships medals.

The second is the “Grand Champion”, where all the fighters competing in the same category, without gravitational constraints. The discipline “grand Champion” in men won Tilen Zajc from the club Pon Do Kwan Izlake. In women, the winner was Ana Znaor from Croatia. Ana won grand champion already last year.

We should mention that in our first international tournament over thirty years ago, only 36 contestants competed and was considered one of the greatest martial arts tournaments in the country at that time.

The club PON DO KWAN ZAGORJE is very proud that this year we organized already 31st. international tournament in a row and attracted the huge number of competitors, coaches, judges and visitors.

Thanks go to Kickboxing Association of Slovenia, which supports the tournament every year.
Many thanks also to the municipality of Zagorje ob Savi, all our sponsors and of course to our loyal club members, without them such a tournament in the database would not have been able to perform.

For the home club of martial arts PON DO KWAN ZAGORJE competed 18 members.

ALEN VOZELJ
President of the club PON DO KWAN ZAGORJE