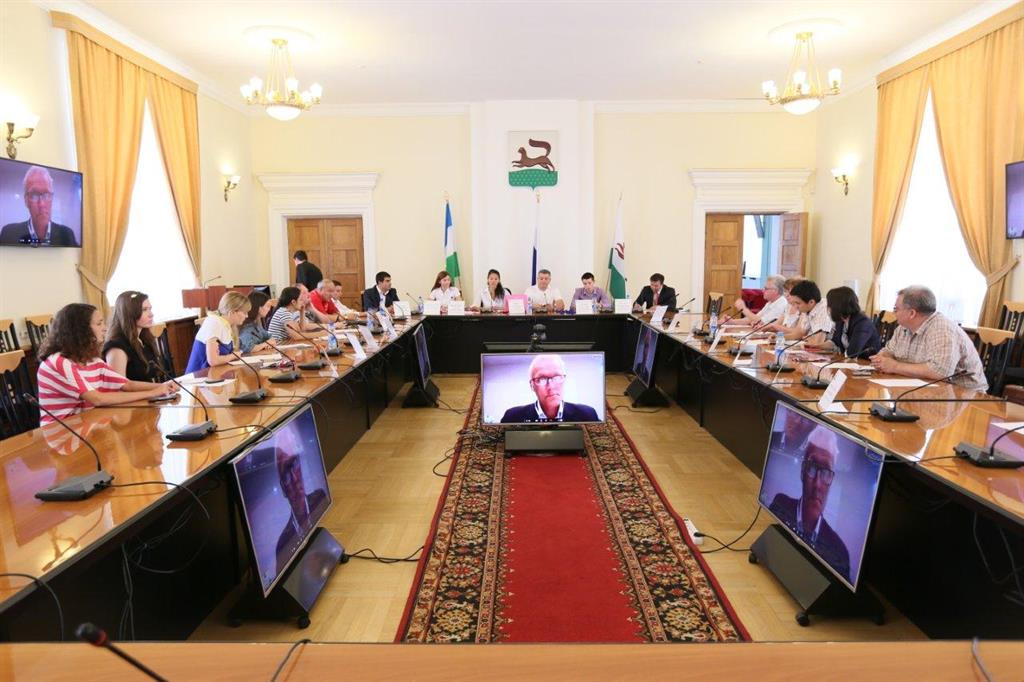 Ufa held a press conference dedicated to the Olympic prospects of kickboxing on July 3, 2014. An important step towards inclusion of kickboxing in the IOC recognised circle, will be the 1st World Kickboxing Student Championship, which will be held in Ufa on July 12-17,2014. Vice President of Kickboxing Federation of Russia, member of the Supreme Council of the Russian Union of Martial Arts Rishat Salimovich Sayapov, Deputy Chairman of the Committee of Physical Culture and Sport Administration of the City of Ufa Ruslan Giniyatovich Bikimbetov and Head of the department of physical education and exercise therapy of the Bashkir State Medical University Ruslan Anvarovich Gainullin were explaining sport journalists about what kind of role the capital of Republic of Bashkortostan will play in the fate of this spectacular sport.

Also video call with the capital of Norway – the city of Oslo was arranged during the press conference, during which the journalists had opportunity to ask some questions to Mr. Espen Lund – Acting President of World Association of Kickboxing Organizations (WAKO).
Rishat Sayapov told at the press conference that huge work is being done today to get kickboxing IOC recognized. Therefore formalities on certain aspects are important. Lack of kickboxing in the program of student international sports (FISU) have been a challenge. Creation of the Student Kickboxing Development Committee of WAKO and organization of WAKO joining FISU must contribute to resolve that challenge. An application to FISU will be done at the next occasion and WAKO are already in dialouge with FISU on this matter. Co-chairs Boyan Kolev (Bulgaria) and Rishat Sayapov (Russia) are leading the informal committee, Student Kickboxing Committee of WAKO together. The committee will be formalized upon next occasion when reviewing the WAKO by-laws.
At the first meeting of the student committee was decided to hold a 1st World Kickboxing Student Championship under the patronage of FISU in 2014 in Ufa. This event will be an important step towards recognition as a IOC recognized sport.
Entry of kickboxing into FISU programmes is already planned in relation to a membership. Further integration of this type of sport in all of the world’s largest sports organizations provides a basis for the formation of the application to the IOC for recognition.
With regard to the 1st World Kickboxing Student Championship – it will be held in Ufa from 12 to 17 July 2014 on the basis of sports center of Bashkir State Medical University. Judges, athletes and fans from more than 20 countries around the world will watch the competitions. A big opening ceremony, solo performances, contact fights and intriguing competitions are planned in the program of the championship.
As noted during a direct connection with Acting Head of World Association of Kickboxing Organizations (WAKO) Espen Lund from Norwegian Oslo, student championship is historic not only for Russia, but also for the whole sports world and the world of kickboxing in particular. He stressed that Russia plays a huge role in the development of martial arts. Espen Lund also described the level of modern Russian athletes as very high.
According to Espen Lund, 1st World Kickboxing Student Championship is of great importance for the further development of Kickboxing as a sport. WAKO already achieved to become member of IWGA and it was included in the invitation program of the World Games in Wroclaw 2017. Now the higher bar is to get into the IOC. 1st World Kickboxing Student Championship is designed to help in this task, as one of important stages in this long and difficult path.
Espen Lund also announced that WAKO is currently preparing a package of documents for the recognition by the International Olympic Committee and following their requirments. Though this is a extensive teamwork from many people in the organization. Of course activities in all continental divisions are important, and for which is being done.
Conducting world-class championship in Ufa became possible thanks to the support of the general partner of the competition – company Bashavtokom. The organizers of the championship are World Association of Kickboxing Organizations (WAKO), Federation of Kickboxing of Russia (FKR), with the support of Administration of the City of Ufa of Republic of Bashkortostan, Russian Athletic Student Union and International Student Organization Federation Internationale du Sport Universitaire (FISU).
Regards, Kamil Yulayev,
deputy chief of department of the press service
Information and analytical management – the press service
Administrations city of Ufa