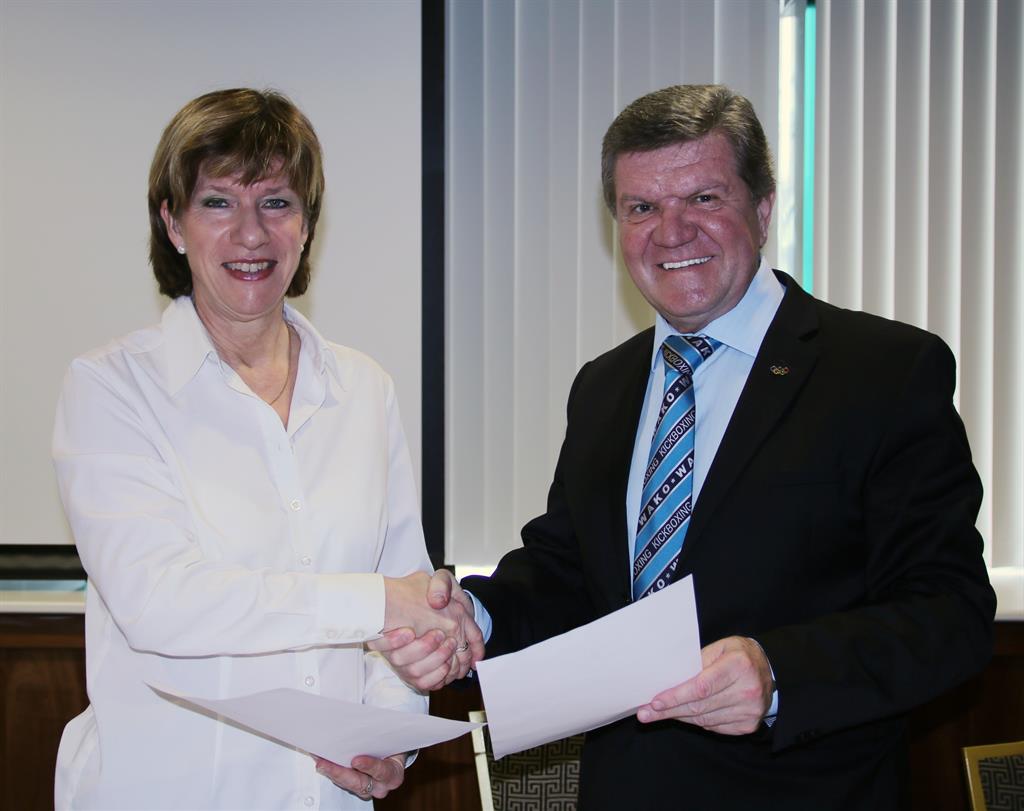 WAKO has become partner of one more International organization which deals with Women in sport.
International Working Group on Women and Sport IWG is International organization from Gaborone, Botswana, dealing with gender equality and women presence in sport in all levels, forcing initiatives to promote physical activity, offering men and women equal opportunities in the sport arena and enlisting men as allies in the fight for gender equality.
On 4th March 2017 during Irish Open International for Peace and Sport WAKO World Cup, it was organized the ceremony of signing the agreement between two parties, which means that WAKO has signed and adopted Brighton Plus Helsinki 2014 Declaration on Women and Sport.
Declaration was signed by Ms. Kristina Thuree, IWG European representative and by WAKO President, Mr. Borislav Pelevic (in the picture on left) witnessed by WAKO Women Committee chairman Ms. Kate Kociszewska and WAKO Women Committee member Ms. Marijana Pelevic.
The presence of Ms. Kristina Thuree on the WAKO Cup was the great occasion to introduce our sport kickboxing and to arrange a meeting with WAKO Women Committee, where important issues of implementing principles of the Declaration were discussed.
The most important highlight of this partnership for WAKO is to clearly step forward in work towards gender equality and equal participation of women and girls in kickboxing sport at all levels and roles: as athletes, coaches, referees and executive officials. For the WAKO, the goal is clear: we already reached the number of 35% female athletes in WAKO, but we have to focus on including more women in executive bodies of the organization.

Ms. Kristina Thuree on the Opening Ceremony introduces IWG and calling for gender equality in sport.


Mrs. Kate Kocziewska, Ms. Kristina Thuree, Mr. Borislav Pelevic, Mrs. Marijana Pelevic in the Peace&Sport White Card Campaign (The White Card Initiative To celebrate 6 April, Peace and Sport invites you to rally around the symbol of a white card as a sign of your commitment to peace efforts worldwide.)