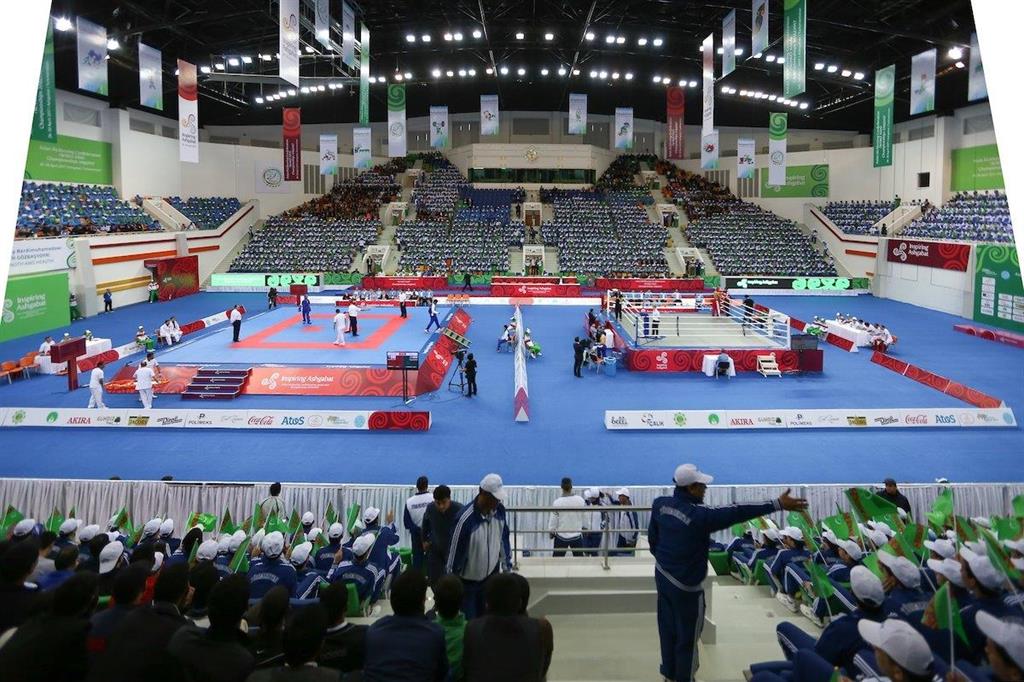 After the successful organization of K1 Rules Asian Championships in 12 categories during September 2016, Asian Kickboxing Confederation (WAKO ASIA) chaired and leaded by its President Mr. Nasser Nassiri, organized the Asian Kickboxing Confederation Championships from the 24th – 30th of April in the “Pearl of Central Asia” Ashgabat known also as white city, capital of Turkmenistan.

15 Countries from the 5 different zones of the Asian Continent (East, South East, South, Central and West Asia) met each other to find their best fighters in kickboxing sport and its disciplines such as Full Contact, Low Kick, K1 Rules (in selected categories which were excluded in Korea in September 2016), Light Contact, Kick Light, Point Fighting and Musical forms.
The first Asian Championships with Olympic standard part of “Inspiring Ashgabat” the Test Event series
However, this is the first time that Asian Kickboxing Confederation organized the Asian Kickboxing Confederation (WAKO ASIA) Championships 2016/2017 with complete Olympic Standard at the occasion of “Inspiring Ashgabat” the Test Event series of competition used for upcoming 5th Asian Indoor & Martial Arts Games at the boasting of the most advanced facilities in the region, the Ashgabat Olympic Complex with the collaboration of the Executive Committee of preparation of 5th Asian Indoor & martial Arts Games.
Organizing Committee of Asian Kickboxing Confederation took high responsibility to assure that the Asian Championships meets all OCA and Olympic requirements, including a sports hall, doping controls, transportation, press presence, live broadcasting, etc. The hard work of the organizing committee of Asian Kickboxing Confederation and its Chairman paid off in the excellent conditions throughout the competition.
In cooperation with the Technical Delegate of competition Area Mr. Euncheon Jeong (KOR) as well as ATOS SE (responsible for timing and scoring at the last Olympic Games in Rio, 2016), Asian Kickboxing Confederation could benefice of the international and Olympic level of scoring systems for both ring and tatami sports as well as musical forms.
Mr. Borislav Pelevic, WAKO President was invited to the event who reaches the competition for the two days final and had the opportunity to visit the Olympic Complex. Many political personalities visited the competition, including the different Ambassadors in duty in Ashgabat such as Islamic Republic of Iran Ambassador His Excellency Seyed Mohammad Ahmadi.
Auditorium of the completely new built Martial Arts Arena in Ashgabat – the capacity of 5000 people – was almost fully booked during the Opening Ceremony on 26th April, Wednesday. The Chairman of the Sports Committee Turkmenistan greeted WAKO Asia, hundreds of dancers and musicians entered the sports hall and presented a great show combining Turkmenistan’s traditions with modern art.
Mr. Nasser Nassiri, President of Asian Kickboxing Confederation (WAKO Asia) opened the event with his speech: “We, Asian Kickboxing Confederation and its board of Directors express our deepest gratitude to the President of Turkmenistan for granting us the organization of Asian Championships in such a wonderful venue. We would like to thank everyone who contributed to the great success of this event. This is a historic occasion, and we’re proud to be here in this great country.”
323 registered athletes from 15 countries were competed in 76 events (categories) in 7 kickboxing styles with a total of 273 fights in both ring and tatami during 5 days competition.
The small number of protests (only 3) during the five days competition confirms that excellent work which was being done by Organizing Committee members Mr. Qasim Al Wasity (IRQ), Mr. Kong, SunTaek, (KOR), Omarmukhtar Tamboli, (IND) and in particular its Chairman Mr. Nasser Nassiri supervising the Asian referees and judges and their collaboration with the invited African and European referees and judges under the direction of Mr. Euncheon Jeong (KOR).
The highlight was the ring sports combat during these days, Full-contact, Low-kick and K1 clashes were on high level. The fighters, Hallyyev Shohrat (Turkmenistan), Ali Aday (Jordan), Khoshkalam Soleiman Seyed Amir (Iran) and Begmatov Chyngyz (Kyrgyz Republic) and many others dazzled the auditorium with world class performances in their kickboxing category. Following this great event, the Asian Power led by Mr. Nasser Nassiri President of Asian Kickboxing Confederation moving forward to the Asian Indoor & Martial Art Games, which will be held at Ashgabat in September 2017.
Medal Standing
After five days of competition, Turkmenistan emerged as the most successful nation winning 27 gold, 25 silver and 23 bronze and the second is WAKO Iran Kickboxing Organization, with 22 gold, 9 silver and 12 bronze and on the third place in the medals ranking was Tajikistan with 12 gold, 7 silver and 3 bronze.
Four kickboxers from Iran and a Turkmenistan athletes completed double gold medal hauls on the final day: from Iran, Majid Akbarzadehmoshtadhi (men’s 84kg light contact and point fighting), Fotima Kholova (women’s 50kg kick light and light contact), Zeinab Jabbari (women’s 65kg point fighting and light contact) and Shahnaz Mirheidari (women’s 60kg point fighting and light contact) achieved the double. The host’s Batyr Charyyev (men’s 94kg light contact and kick light categories) also claimed victories in all bouts he fought in.