WAKO at PEACE and SPORT FORUM 2017 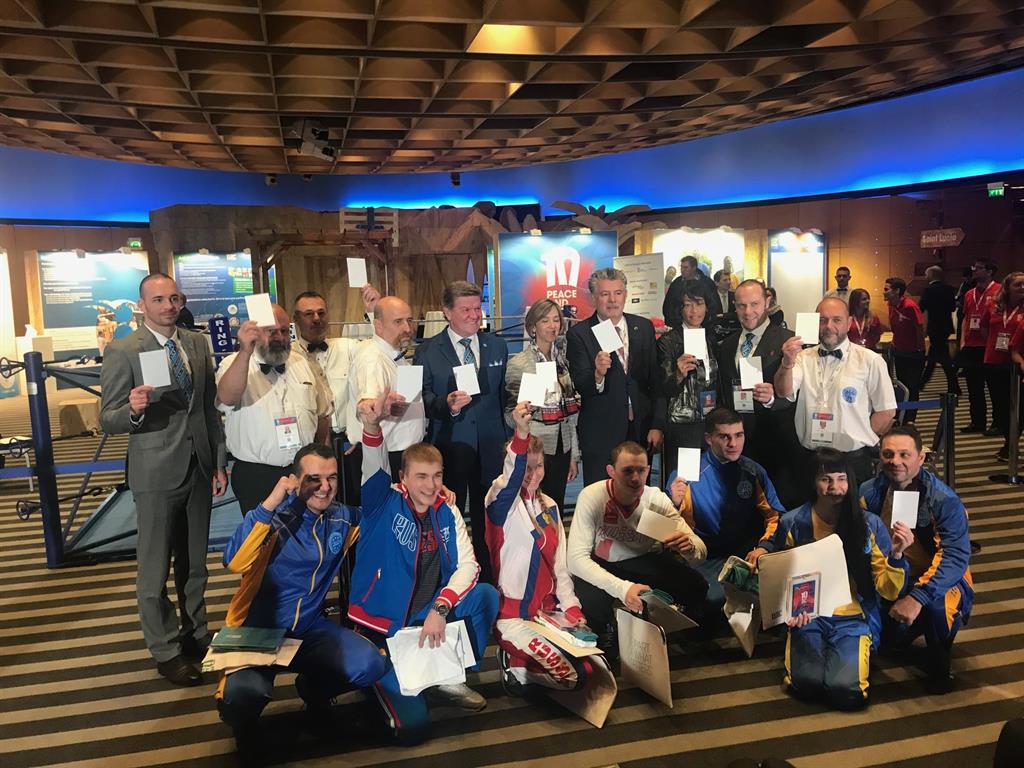 Memorable days for WAKO at the Peace and Sport Forum held in Monaco on 6th and 7th December 2017.

Peace and Sport had a 10 years anniversary with a very interesting agenda. Coincidentally this year at the event WAKO had visibility we could only dream of, after a year of a fruitful cooperation. A great opportunity for WAKO to showcase our sport and to show true WAKO spirit.

As you all know Zsolt Moradi (Hungary) was announced earlier this year as a champion for peace and for WAKO his contribution had started already. He was invited to have a friendly training session with other Champions for peace. He did a great job engaging a lot of great athletes, including Pedro Yang (former member of IOC Athlete Committee), Wilson Kipketer (Olympic medalist and world champions in athletics 800 meter) and a team from Colombia and Venezuela.
Moradi also attended several meetings with other championships for peace discussing activities going forward.

The most visible WAKO presence though was when WAKO organized a Diplomatic event in the convention area. We were asked only 2 weeks ago if we could establish 2 matches between fighters from countries in conflict. AIBA was supposed to do this event but due to their international situation they had to withdraw at the last moment.
We grabbed on this chance as a great way of showcasing our sport and in a fair manner. Even though we tried various options we got a very positive response from Russia and Ukraine. We invited 4 athletes and organized one male and one female match in full-contact. The idea of a diplomatic event is to demonstrate that sport should be practiced despite political conflict or rivalry and to demonstrate the friendship and unity sport brings. The event was a success and all the audience was composed by delegates from the Forum, sport politicians, politicians and sport ambassadeurs. Besides the matches we had speaches and Peace and Sport organized certificates and awards to both athletes and referees.

We had referees and judges from France and Monaco present and we also need to extend our appreciation to Claude Pouget for his great service and assistance helping us on spot.

We cannot ask for more “spotlight” for our sport and we got a great opportunity. A great thanks to Sport and Peace for their invitatiion to organize such event.

WAKO was also nominated as federation of the year because of our promotion of Peace and Sport movement, especially with our White Card initiatives. Along with Badminton and Volleyball we joined a good company with many other great sporting initiatives. Badminton won the award and it was indeed well deserved and WAKO was just happy to be a part of the list of nominees. WAKO was mentioned many times during the Gala with its engagement and especially because of the diplomatic event earlier that day and the importance such initiative brings.

Personalities present at the Forum were HRS Prince Albert II of Monaco and Professor Mohammad Yunus, 2006 nobel peace prize winner, that also signed a cooperation with Peace and Sport.

WAKO also had meetings with Peace and Sport and other IFs in order to share ideas in order to engage in coming activities.

Some great days were spent in an environment WAKO belongs in.

“As President I understand the impact that Peace and Sport movement has got all over the world and I am inspired to get WAKO even more engaged to create a better society. I can only confirm that WAKO is on the right track. I address my respect to the great and important work done in Peace and Sport by the founder Mr. Joël Bouzou. WAKO is very happy to be a part of this great movement.”

WAKO at PEACE and SPORT FORUM 2017