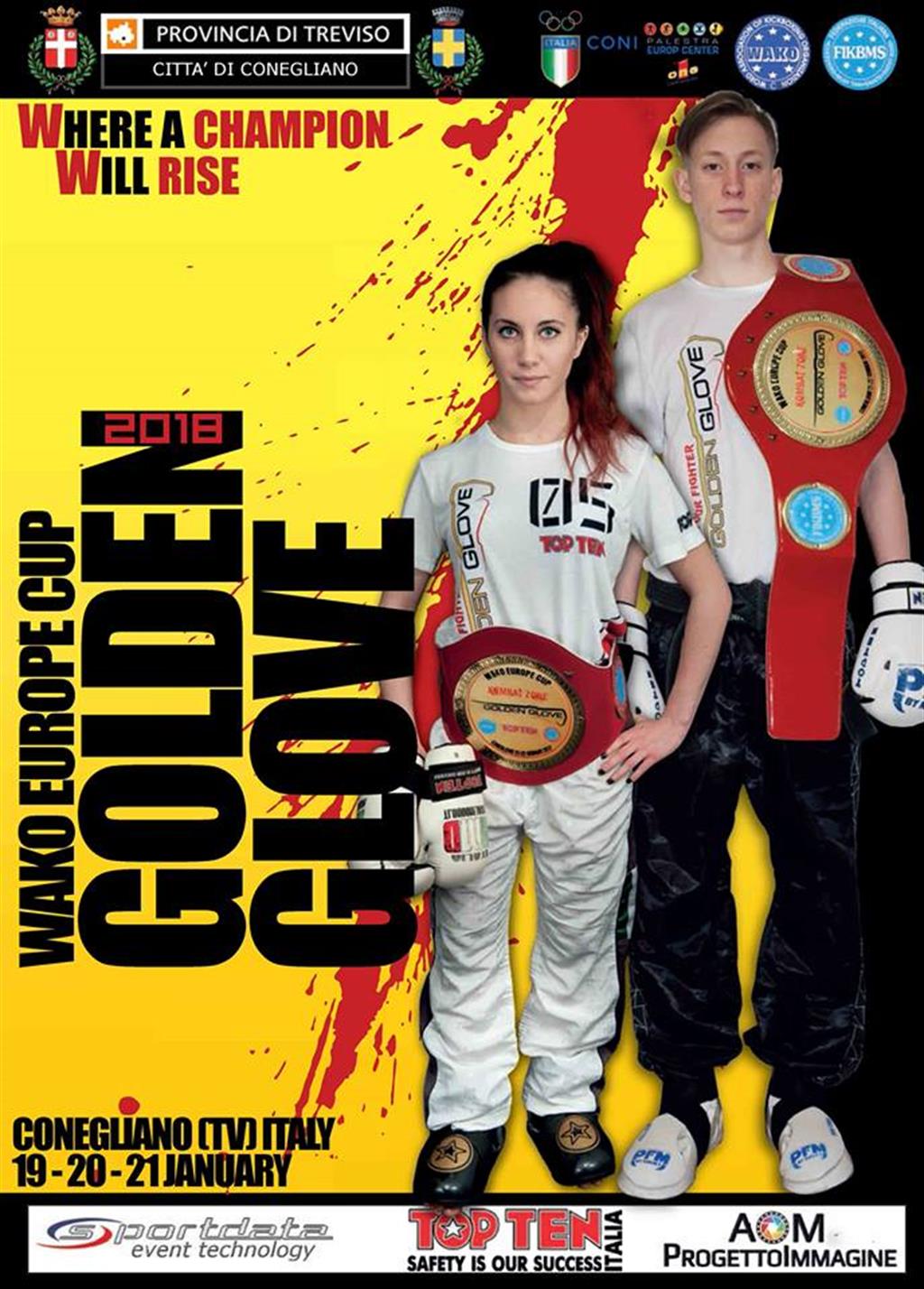 The 13th edition of the Golden Glove – an international event and a must for local kickboxing lovers – was held on January 20th and 21th in the new Zoppas Arena, near the city of Conegliano .

The Arena housed 8 squares and a giant screen that projected images from the previous editions, and staged numerous competing fighters – about 85 clubs and 1000 entries – the half of which were international athletes from a dozen of foreign countries.

The Wako Europe Cup Golden Glove 2018 – an event supported by the World Association of Kickboxing Organizations – was arranged by the Europe Center One club in association with the Venetian Regional Committee of FIKBMS – the Italian Federation – and with the help of ZenShin, an association from Mareno di Piave.

The competitions started on Saturday with 15 K1 matches, a style that was staged for the first time in this Europe Cup. The day continued with the Light Contact and the KickLight divisions, and with the Tag Team in the evening. Sunday was dedicated to the individual Point Fighting, to the amazing Grand Championship, and the TopTen Kombat Zone tournament shows.

The opening ceremony stirred deep emotions, with the drums and the flag-wavers of the association “Dama Castellana” (Lady of the Castle), who preceded the entry of referees and children holding the signs of the participating nations ( Italy, Austria, Belgium, Croatia, Czech Republic, France, Hungary, Liechtenstein, Holland, Slovenia, Ukraine, United Kingdom ). The President of FIKBMS, Donato Milano , proudly expressed the importance of pairing culture and sport: “ W hen sport is combined with culture and tradition, success is assured, as Italy has a history that must be remembered, and sport is part of it” .

“ What a show is this Golden Glove! – the promoter of the event Raffaele Di Paolo said enthusiastically – year after year it is growing in numbers, awards, quality and number of styles. The amazing staffs involved have excellently managed the registrations, allowing to carry out the competition within the scheduled time, thus providing serenity and concentration to fighters and coaches!”

The TopTen Kombat Zone , a competition at the highest level, saw the knockout of top fighters from all over Europe. After an exciting performance, the Italian fighters Riccardo Albanese (Fire Generation Team) and Martina Rossi (HMD Italy Team) won the belt, the original handmade Murano glass trophy, and the cash prize.

The Men Grand Championship was also amazing and displayed a podium dominated by the Hungarian Kiraly Team – composed by the Veres brothers (Richard and Roland) – the Slovenian athlete Kolander Tadei , and Riccardo Albanese (third place).

Italy won the highest place of the podium in the Women Grand Championship thanks to Martina Rossi (HMD Italia Team), and the third place with Deborah De Vita (KBA Team).

At the end of these two days of amazing challenges, the President of the Europe Center One club, Luca Terrin, proud of his staff, told us: ” We are already devising new ideas for the next year. This competition is constantly growing and we are confident that the National Federation is keeping an eye on an event that for years has been attracting to Italy formidable top fighters. Meeting high level athletes and coaches help us improve, and I would like to thank all teams and referees for their contribute, and our main sponsor, TOP TEN Italia, that provided the equipment to set up a wonderful arena and gifted each winner with a beautiful pair of gloves” .

The competition was sponsored by CONI (the Italian Olympic Committee) of Veneto, the Province of Treviso and the Municipality of Conegliano. The next edition of the Wako European Cup Golden Glove 2019, is already in progress.

All results can be found on www.sportdata.org