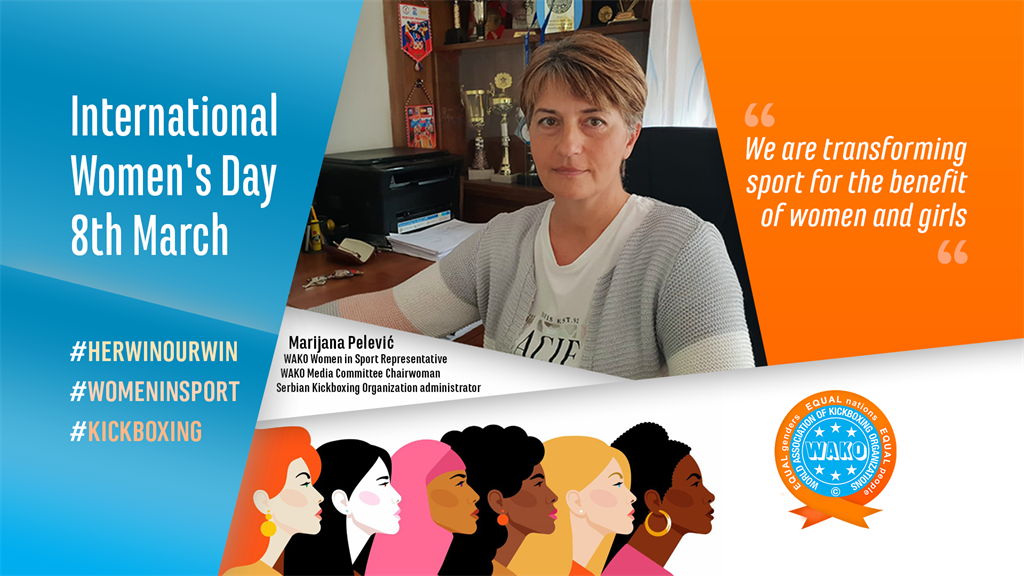 Read the story about Marijana Pelevic, WAKO Women in Sport representative, a woman who is changing the face of our sport

1. When did kickboxing appear in your life?

M.P.: After finishing my studies at the Faculty of Philosophy, Department of Education and Psychology, I started to work in the small office which was publishing Martial arts magazine. Symbolically, that 8th March 1988 was the day when my involvement in this sport started. My true love for kickboxing appeared from the love of my life, my husband Borislav, who was the pioneer of this sport and from 2015-2018 a president of WAKO. With him I have passed the whole road from the early years back to 1988 till now in the development of the WAKO kickboxing. We traveled together all around the world, going to the tournaments and gaining many friends from sport.

2. How does the development of kickboxing look like in your country?

M.P.: Development of the new sport in former Yugoslavia and Serbia wasn’t easy, but it appears that the mentality of our people completely have understood and adopted the essence of dynamic martial sport with kick and punches, and accepted it with joy. The first tournaments, competitions, profi galas were extremely popular, it was always the lack of the seats in the sport halls, our athletes were heroes. Our job was to shape and direct that huge positive energy to create a well organized sport association and now, I see we have succeeded. Kickboxing in Serbia today is a sport with most trophies among non olympic sports, has the government support and is the sport for which the government has the special interest in. We are involved in schools, in the police and army forces as well. We have several projects with the Ministry of youth, the most popular is “Kick the bullies out of schools”. We also participated in a public project to stand up for stopping violence against women in families, where we were distributing t-shirts to martial sports champions with the quote on it: ” If you want to slap your wife, try first with me”

3. What do you feel about kickboxing?

M.P.: I really love kickboxing. It can be trained at recreational and competitive level, as the tool to improve overall health and to learn self defense. Kickboxing has seven disciplines, like the Swedish table for all interested to train: pick what you like to train. I have four children and the second daughter is training kickboxing as the recreation and is a national judge. My son who is 18 was engaged as the volunteer at WAKO athlete corner during the World Championships in Antalia, and at International Kickboxing Day was doing a live interview with the President Roy Baker on Instagram. My other daughter, who is a lawyer, is helping me with Bylaws and documents in Serbian kickboxing federation where I am employed. As you see, everybody in the family has some voluntary duties in kickboxing.

4. Tell us about your engagement in WAKO Women in sport Committee.

M.P.:When I was proposed for the member of the WAKO Women in Sport committee 2016, it was an honor for me. We immediately created a fantastic team of energetic, educated and dedicated women who really wanted to make a change. Until now, we clearly positioned the woman in our organization, created the set of the Bylaws which defines the equality principles in all fields in the organizations, created several humanitarian actions with funds raising for the projects concerning researches in medicine (breast cancer), initiated several projects such as Her win our win, Generation equality, Save the nature, WAKO for climate, etc, all with the main goal to promote sustainable sport and successful and strong women from our sport. Especially, we promote projects directed towards young girls and their involvement in sport. Of course, we take care about women issues during the championships and we are now recognized as the valuable partner of the WAKO promoters. Finally, we have organized The First WAKO Women Conference 2017 and we are planning to organize the second one. We already have much interest in the male side in WAKO for the participation, and that is something that we are very much happy about.

5.What is your role in kickboxing organization?

M.P.: I have already said that I am employed in Serbian Kickboxing Federation, as the administration officer, PR and Social Media officer. But, at the same time I work in the world organization WAKO as the Social media manager and a photographer, on a voluntary basis. I am also involved as a member of the Organizing committee in the preparations of the tournaments in my country and in the WAKO. I pretty much enjoy my work, so whenever I travel at the WAKO Championships, when they ask me “Is this a business or pleasure trip?” I answer “Both”. As a cancer survivor, I have learned that I have to appreciate every moment in life, to give the best of myself in every work but always putting family and friends first.

6. The main goal of the WAKO Women in Sport Committee?

M.P.: The main goal in WAKO Kickboxing organization, WAKO Women in sport Committee as well as my national federation, is to empower and uplift more women and girls to engage in sport as competitors and officials. From many people’s perspective the access to sport today is something that we take for granted, but it is not so. You can’t imagine what stories we heard from various women and what boundaries women all around the world have to overleap to take part and stay in sport. There are still systematic barriers that keep women out of the sport. We are really tired of the patriarchy and the traditional gender roles. It is time for the equal future.

On the occasion of 8th March, we inspire the world of kickboxing with the stories about many successful women who can be an inspiration for the future generations.

Let me share with you several facts from today’s sport environment:

– following his recent election as the President of the Football Federation Islamic Republic of Iran, Mr. Azizi Khadem pledged to support women’s football in his country.

– The World Games Birmingham 2022 Board made a significant positive change in appointing the new members from various minority background striving for equality​.

– At least 11 women are set to be added to the Tokyo 2020 Olympics Board following comments from the new Board female president Seiko Hashimoto that 40% of the Board should be female.

On the 8th March, we are celebrating contribution of the women on whose shoulders we stand: Theresa Malkiel, Clara Zetkin, Rosa Luxenburg, Sylvia Pankhurst, Eleonore Roosevelt, Malala Yousafzai and many more. Leaders, changemakers, educators, caretakers, peacekeepers. Thanks to their courage & persistence, we have come this far.