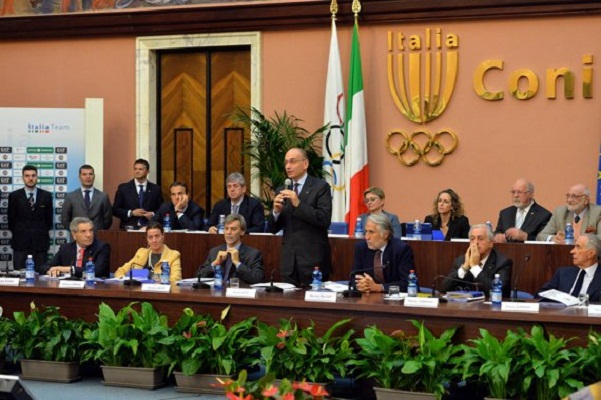 On November 13th, 2013 in Rome (Italy), Barbara Falsoni, daughter’s of WAKO President, was present at CONI National Council meeting, during which CONI President, Mr. Giovanni Malago’ (on left side in the picture), delivered a special award to her for Ennio as FIKBMS (Italian Kickboxing Muay Thai Savate and Shoot Boxe Federation) President; a Gold Star for his contribution to the Sport world, both at national and international level in so many years of activity!
Gold star is the maximum recognition delivered by CONI.

Barbara received the award with great emotion and during the ceremony declared:
“I’m very proud of my father and his achievements. Hope this recognition may be an additional input for Ennio to keep on fighting in the hardest battle of his life like a real warrior, as he has always been.
It’s a great honor for me to be here on his behalf!”

Also Italian prime minister, Mr. Enrico Letta (below in the picture), attended the event for the Council meeting opening speech.