New Year Wish by WAKO President and Exciting News for 2022 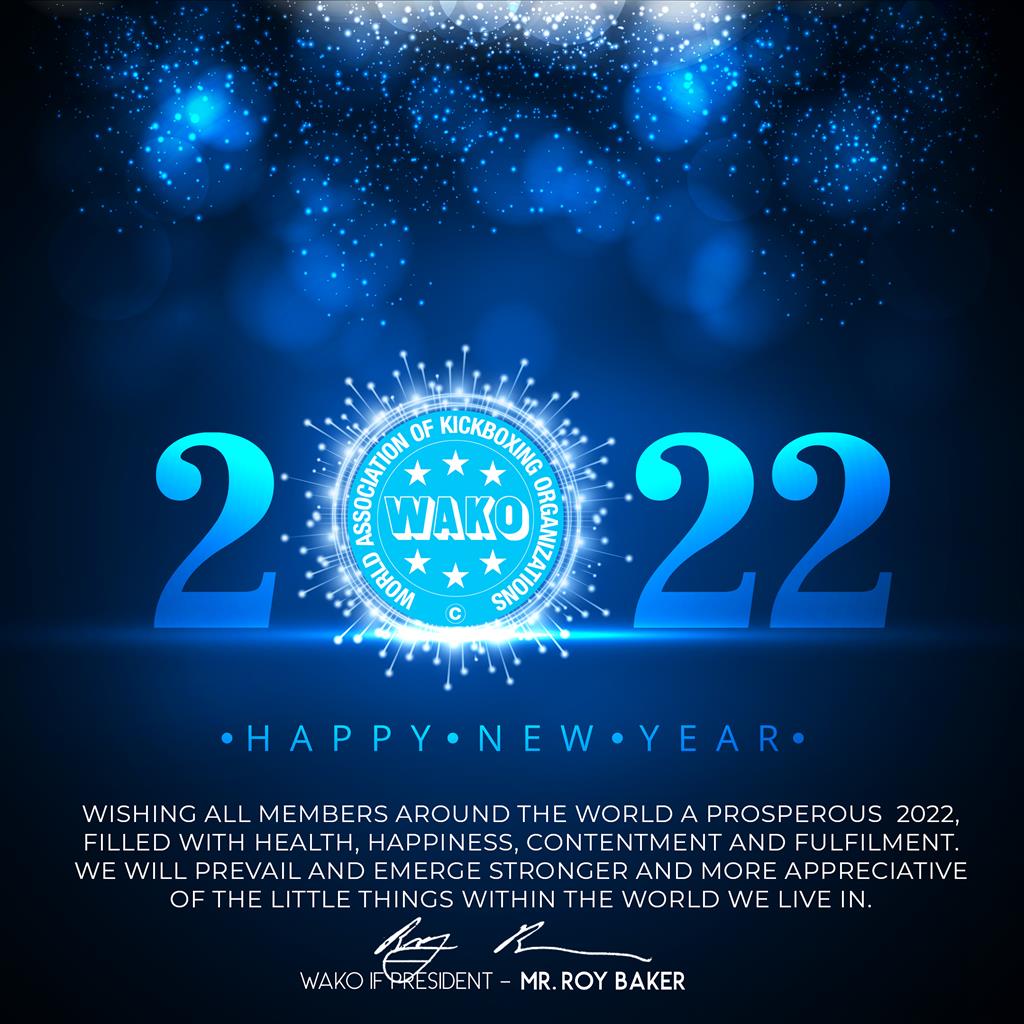 Some countries don’t celebrate Christmas, like I do in Ireland, but everyone welcomes in the New Year, even if it’s on different dates.

For me reflecting on the last calendar day of this year, I have realized as president, in my second year of office, that Power isn’t control at all—real power is the giving of that strength to others. A leader isn’t someone who forces others to make him or her stronger; a leader is someone willing to give his or her support by empowering others and believing in them and most importantly delegating authority to them, so that they may have the strength to stand on their own two feet and achieve their objectives with your support for the wider good of our sport worldwide. There is a fundamental difference between being a leader and being a boss. Both are based on authority. A boss however demands blind obedience; a leader earns his or her authority through understanding, empowerment, delegation, and trust.

This year we have again see Corona impact our society and our sport, despite this we have been able to host a number of major events, the World Championships hosted in Italy was a record breaker in regard to countries and participation, something we should be very proud of.

A number of other major events where held, two world cups, a European cup and of course the European Junior and Cadet championships, alongside the recently held South American championships, all showing that we and our federations continue to deliver in spite of the obstacles we face. This was done by you our members at national and international level, putting in uncountable hours of work and sweat to achieve, develop, and grow the sport, for that I thank you and the all members we will prevail, we will emerge stronger and more resilient than the past. In that I have absolute confidence.

At the end of each year, we should reflect on the challenges and the accomplishments. This year will go down in the History book as the year our sport received full Olympic recognition, this only happened through the collective efforts of a team, the WAKO Team, which consists of volunteers who passionately believe in the sport we do and its positive impact on people and the lives they lead. They did it, no single person achieved this a team that did this on behalf of every single member in the Organisation.

We also had fantastic news of the sport of Kickboxing being included in the 2023 European Games, again a team effort. We are also confirmed as an official sport in the upcoming World Combat Games in Saudi Arabia, Further details of the selection process will be issued in the coming months. We are also in the upcoming Asian Martial Art Games and SEA Games. Well done to all involved in these achievement,

Some other exciting news for the NEW YEAR.

Social Media Office: Next year in January, WAKO will have a full time Media office, developing and promoting the brand of Kickboxing worldwide. Further updates in the new year, we really want to professional promote, you, your federation, the continental federations and WAKO.

National Federation Development Seminars 2022: We will be Hoisting two development seminars this year one in Asia and one in Pan-American. They will be focusing around the development of the national federations and sharing of best practice. Similar to the highly successful event in Turkey in 2020. Final details will be issued in Jan.

WAKO Dan Grade: A new WAKO Dan grade will be issued in the coming days, to counteract the forgeries that are continued to be used. This new certificate will be the only internationally recognized certificate going forward, it will have specific measured embedded in it to prevent forgery. Something that is happing way to offer.

WAKO Pro: As you all know WAKO Has a long standing Memorandum of Understanding with WAKO pro, Some Exciting news coming of the relaunching and rebranding of WAKO pro in the coming days, focusing around an amazing concept being developed by the management team. This is a really needed addition to the services we and our partners can offer our member federations so we keep our talent and referees and discontinue feeding our competitor Orginisations, Armature or professional.

And FINALLY: New year is a time for inspirational dreams but more importantly a time to set your goals to see the dreams that wilt effort, resilience and perseverance will turn into a reality, this is the way of WAKO, this is why there is ONLY ONE WAKO and in particular ONE CHAMPION, let’s do this together as a team, focused, determined and aligned to a long term sustainable future for the sport of Kickboxing and the members the WKO Family.