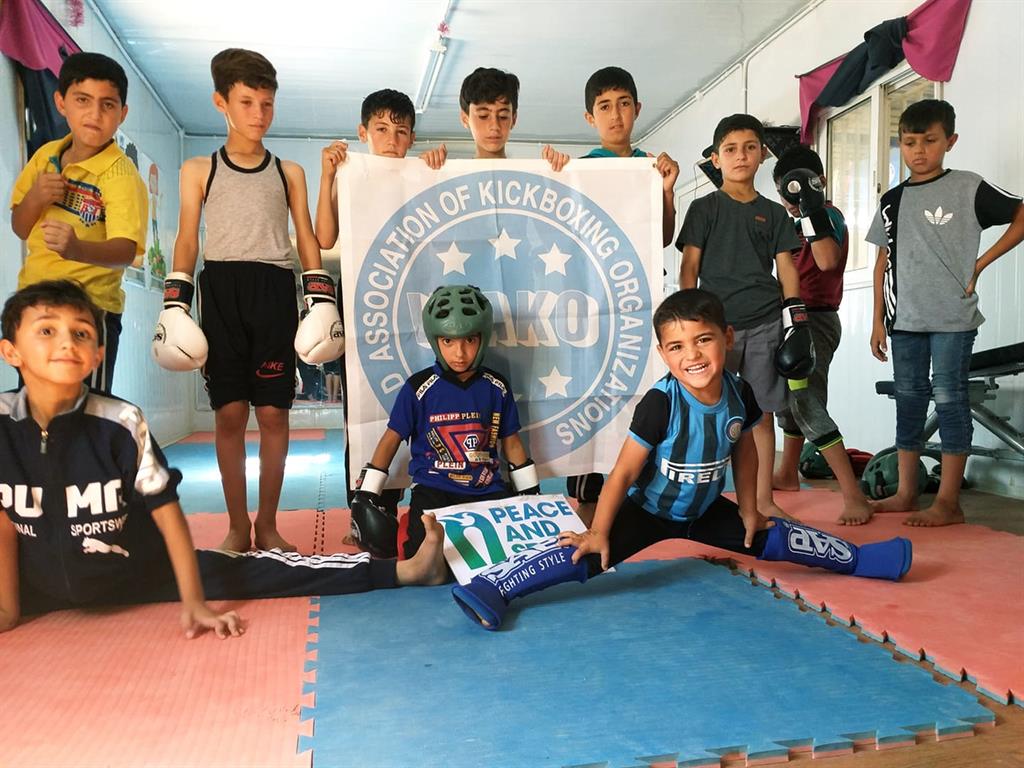 The World Association of Kickboxing Organisations (WAKO) has signed a cooperation agreement with Peace and Sport to help coordinate activities and social initiatives in areas of the world facing daily conflict.

The ‘Because We Care’ initiative sends former kickboxing world champions and elite-level coaches into refugee camps and areas severely affected by war, to set up development programmes and participation activities for people who have been forced to flee their homes.

An example of this is in the Za’atary Refugee Camp in Jordan, one of the largest refugee camps in the world with approximately 80,000 refugees. WAKO sent four of its best coaches to the camp, with the aim of teaching young people how to effectively manage their aggression, improve the wellbeing of young people within the camp and inspire the next generation through combat sports.

Plans for this ambitious project began in 2017 and a year later, the ‘Because We Care’ initiative was implemented. In 2019, WAKO hopes to continue the project with a self-defence programme for women, as well as expanding into new territories.

GAISF President Raffaele Chiulli praised the initiative and highlight the importance of sport in global development:

“ The role of sport is to provide opportunities for people to learn new skills, work as a team and have fun, regardless of age, race, religion or location,” he said . “WAKO’s latest initiative incorporates all three elements and GAISF is fully supportive of the organisation’s efforts. I believe that together, we can use sport to resolve conflict and I hope that this serves as an example to other GAISF Members for future projects .”

“ WAKO’s objective is to make a difference using the power of contact sport to create equality and opportunities, to give children the ability to grow, to give them resilience and creating an environment where they can develop various coping mechanisms to enable them to deal with the challenges life can throw at them.”

“We are empowering people from within, not as a one off, but a continual development programme that will make a tangible difference. That is my responsibility, and our collective responsibility as leaders in sport, to also be leaders in our respective communities.

“WAKO has attributed a yearly budget for the next three years, but to be clear the human effort behind this financial point is far higher. Everybody is giving their time free of charge. I am proud to say that the people behind WAKO have a very big heart. We have put a huge amount of time, resources and effort in to mobilising this and it has inspired us to take this program further in to Africa in the coming months .”

President Baker went on to explain why the ‘Because We Care’ project is so important to WAKO:

“ There are injustices all over the world and we as a board felt we have to begin stepping in to this field in a meaningful way, not on a single engagement and expect their world to change, but putting in place a structure that self evolves with the right focus and the right inputs.

“It is our social responsibility to build hope and a future through sport, where dialogue, respect, tolerance and solidarity are the essence. Simply making the world a better place using kickboxing concepts as our tool .”

WAKO has been a GAISF member since 2006 and was granted provisional recognition by the International Olympic Committee (IOC) in November 2018.

“ Gaining provisional recognition is another huge positive step for the sport of kickboxing,” President Baker added . “During our first official meeting with ARISF President Raffaele Chiulli, I asked him how we can help ARISF. I believe we can all learn and share amongst the members of ARISF to make the organisation stronger.

“GAISF was a huge support, in particular our new President Raffaele Chiulli gave me personally and WAKO First Vice-President Espen Lund a lot of advice on how to develop and construct our application. For that I would like to thank him, as well as the Alliance of Independent Recognised Members of Sport (AIMS) which was also a big help. The journey has taken us 15 years of hard work, but because of it our sport, our governance and most importantly our athletes will benefit. ”